This week, British Columbia and the Yukon will host the Duke and Duchess of Cambridge, with their two children, Prince George and Princess Charlotte  at the invitation of Prime Minister, Justin Trudeau.

Follow in the footsteps of the royal family with a visit to Canada, in style and absolute luxury.

The hotel’s regal connection stretches back to 1919 when Edward, Prince of Wales, waltzed into the dawn in the Crystal Ballroom – an event considered by Victorians to be of such importance that almost 50 years later, the obituaries of elderly ladies would appear under headlines such as, “Mrs. Thornley-Hall Dies. Prince of Wales Singled Her Out.” In 1939, King George VI and Queen Elizabeth experienced afternoon tea at the historic property, and more recently the hotel welcomed Her Majesty Queen Elizabeth II for a Golden Jubilee luncheon in 2002.

For the ultimate regal experience, live it up in the Fairmont Empress’ sparkling new Royal Suite – replete as it is with a king bedroom, living room parlour, dining room for eight, modern spa bathroom and ensuite powder room.
If even you aren’t staying here, do take tea at the Empress. The Fairmont Empress Tea China was originally presented to King George V in 1914 upon the opening of the Booth factory in Stoke-on-Trent, England. The china was first used by The Empress in 1939 for the Royal visit of King George VI and Queen Elizabeth and is still used to this day. The pattern is now produced by William Edwards exclusively for The Fairmont Empress.
The Empress has partnered with Darren McGrady – a former Royal pastry chef who also worked for Princess Diana for four years – so he knows exactly what to create to please Prince William and discerning Sybarites.

The Duke and Duchess of Cambridge arrived in Vancouver last Sunday (25 September). They travelled by float plane from Victoria – a journey which allowed the Royal couple to see the beauty of Vancouver as they arrived, in addition to catching a glimpse of Granville Island – an oasis in the middle of the city. Picture a place moulded by a fascinating history, buzzing with a colourful artistic community; a living, breathing urban oasis filled with fine waterfront restaurants, theatres, galleries, studios, unique shops, cafes and a fabulous fresh food market. Add a vibrant and diverse mix of people and activities, and you have a destination so dynamic, no visit to the city is complete without spending at least a day here.
And, as you would expect, the islanders have gone out if their way to make sure the Windsors feel at home. “We are super excited about the royal visit and wanted to create something to celebrate their arrival,” shares Lisa Simpson – owner of Liberty Distillery on Granville Island.  Step forward “The ‘Royal Tea Cocktail’ […] inspired by… royalty!” The specially created cocktail consists of Gin “a favoured spirit in the UK. We also included our Endeavour Pink Gin, infused with local cranberries. Plus with Earl Grey Tea syrup we thought it was something we could call the ‘Royal Tea!’, says Simpson. 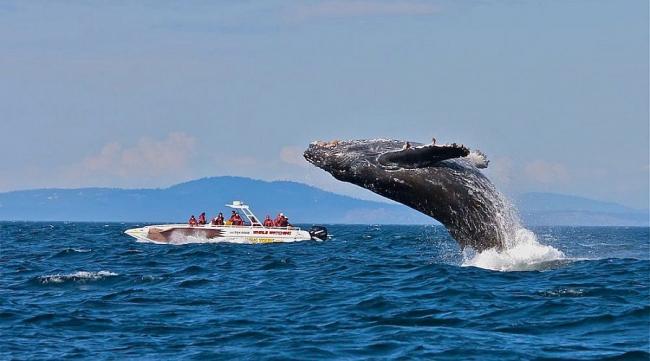 “The first thing to do in Victoria is to get out and see the whales– it’s the best whale watching anywhere on the planet.”
And if anyone should know, it’s Captain Ian Roberts who has been leading unforgettable whale watching trips off Victoria for the last five years. Roberts’3-hour Whale watching experiences take place on a zodiac (often called “Rigid Hull Inflatables) – fast, open vessels that are ideal for those wishing to experience an exhilarating ride in the open air and sun.
The 12-passenger zodiacs are powered with twin engines and are equipped with high tech safety equipment, as well as Hydrophones (an onboard acoustic system that allows listeners to hear sounds from beneath the vessel). After having been assisted onboard your 28-foot vessel, you will be offered gloves, goggles and sunscreen (should weather conditions require).  Then following a safety briefing with your Skipper, off you go!

In addition to majestic Vancouver Island whales, Sybarites can expect to see seals, sea lions, seals, porpoise, and marine birds. The biology, behaviour and habits of these animals are discussed at the many stops made en-route and needless to say, the photo opportunities are phenomenal! With the vessel at rest, take out your camera and enjoy the nature around you as you listen to the naturalist imparting stories of the Pacific Ocean ecosystems.

The city of Victoria has royal connections.  The capital of British Columbia was originally going to be named Camosun, a Songhees word meaning “where different waters meet and are transformed.” However son it was decided the city should be named for the young Queen’s husband and so, for a short time, it became Fort Albert. When it was known that the city would be the Hudson Bay Company’s headquarters west of the Rocky Mountains, and destined to become a new British colony, it was decided that no less a name could be attached than that of the Queen herself.

Fast forward to 2016 and Victoria is a distinctive blend of old world charm and new world experiences: heritage architecture and colourful gardens mix with outdoor adventure activities such as kayaking, whale watching, hiking, cycling and golf.

Set against a backdrop of the Olympic Mountains and surrounded by old-growth rainforests, North America’s most English city is postcard pretty.